I’ve had a bit of experience lately with selling things online. I’ve had to clear out my Mother’s house after her sudden death a few months ago, and I can now give my own first hand experience with various ways to sell.

I had a dining room suite to sell and was advised to sell it on eBay, as more people would see it and with an auction, may have a few people competing for it. It was a lovely suite and I would have kept it but for the fact that I only bought a table myself last year. I put a reserve on it, as I didn’t want to sell it for a song, and the total cost for selling with eBay was almost $10. I didn’t get one bid on it. There were so many layers of categories I’m sure a lot of people didn’t even see the set. My brother had to get me to give him the auction number so he could refer people to it, and he knew what he was looking for. Now perhaps something more desirable and in a less complicated area would have been more successful. But my experience wasn’t satisfying. 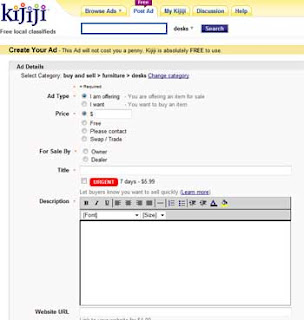 Other things I had were less expensive and so I decided to put them all on Kijiji.ca. I listed them in my own area as well as a few larger cities (in my case Oshawa that isn’t that far a drive for a bargain) so more people would see them. Every item got seen immediately and within a couple of days I could see that I had over 100 views for each item. And the emails started to come in. I sold everything except an ornate mirror, (but it is still up there ) within a couple of weeks of them listing. Even the dining room suite that had no interest at all on eBay, finally sold for my full asking price.

I also used Freecycle to offer some old encyclopedias to anyone who may want them. This was by far my worst experience (not selling on eBay was at least easy!). First of all, to join Freecycle, you must have a Yahoo account which means yet another email address. I already have a hotmail and gmail account so didn’t appreciate having to sign up for yet another one. Then I had to wait for confirmation that this was approved. Then I could sign up and wait for approval from Freecycle in my nearest area (in my case, Peterborough). This took so long that by the time I had emailed them as asked how long it took, I had forgotten my Yahoo account name (I wrote it down somewhere) and had to start again. Finally, I listed the encyclopedias free to anyone who asked. Two people said they were interested, so for the sake of fairness I offered one set to one, and another set to another person. The one person showed up when she said, took the lot of books and said she’d take the others if the second person decided not to take them. The second person sent me no fewer than ten emails with a litany of excuses as to why she couldn’t come (kid’s cold, her cold, then some surgery, then recovery) all the while saying she still wanted them. Finally she said to give them to someone else. I contacted the first person to tell her that she could have them as well, and even met her at the local post office, where she said she’d contact me, but never heard from her again!

I also used CraigsList, and listed a couple of items and got not one response.

All in all my experience with the four sites overall was that Kijiji was the clear winner. I got rid of the one set of books through Freecycle, but it was a hassle to join, and I offered other free things on Kijiji and ended up doing just as well without the hassle.

My experience with people buying is also worth mentioning. In my case, the items for sale weren’t at my home, they were at my Mom’s. So when making an appointment with someone, I had to be at her house a bit ahead to meet them. And people are often a pain in the butt. I’d say 70% didn’t show up when they said, were late and didn’t bother to call the cell number I supplied them with. One woman was half an hour late, walked in, said “oh, that will be far too big for the space” when she was supplied with the measurements, and then left with no apologies for wasting my time. Another treated my Mom’s house like a giant flea market even making an offer on my Mother’s urn (it is a lovely sculptural piece, but still) and trying to negotiate on prices she’d already agreed on. Another fellow said he’d come at 5 pm, had agreed to a firm price and then sent his employee at 12:30 to pick up items (I just happened to be there to wait for someone else) because he decided it would be more convenient for him. And his employee asked if I’d accept almost half of the agreed price! I said no.

All in all my impression is that Kijiji is the best place to sell items overall. If you know the price you want for something, then list it. Keep an eye on what page it is listed on, and re-list it if you don’t want to pay for the top listing. List it in more than one area if you think it is worth people travelling to see it. People will look in other communities’ listings if they are looking for something, but if you don’t mind the extra work, it makes it easy for those who only look in their own area.

Kijiji’s website was the easiest to use and by far, the most graphically pleasant to look at. And like eBay when it first started, I was selling my items to people just like me, not some corporation.

I’ve heard a lot about Craig’s List, but was surprised at how basic it is (i.e. not pretty) and also that I didn’t get any responses.

I used to use eBay in the UK and liked it there, but my overall experience here in Canada is not great. Too many big sellers, and the nice homey feeling of selling to another person like yourself isn’t there any more.

Freecycle is an excellent idea, but it would be nice to see it not associated with Yahoo for ease of use. It is about helping the planet and not throwing things in the dump. And what they say is true, one person’s junk is another person’s treasure. I know someone who collects LPs and he has gotten all of his collection for free through either Freecycle or kijiji.

Finally, be careful who you reply to and realise that not everything will sell immediately, but even things I was having trouble selling (a really nice couch) eventually was sold. Also, don’t arrange to meet people late at night and don’t accept anything but cash once they’ve agreed to purchase it (in other words, get the cash, then let them start moving stuff!) I didn’t have any trouble, but a few people’s email addresses (scary names or just numbers) did make me hesitate to even reply to their query. Potential buyers don’t know my email address until I reply. You can report scammers to all of the companies, even if it stops them from doing the same to someone else.

Have a couple of decent photos and measurements of all items. Be honest about the condition an item is in. No one likes their time wasted with items not described properly. And a good photo (you can have three for free in Kijiji) will help sell the item and save time having to describe it to people inquiring.

Even though I’ve complained that people were late, most of the people were really nice, happy to be getting a good bargain and knew that they had to pay cash and be ready to move the items in question. The couple that bought my Mother’s dining room suite were thrilled with it, he carefully unscrewed the table top to move it and I felt really happy that someone knew they were getting a bargain, and would look after it the way my Mom did. May seem silly to care, but I did.

Don’t forget also, you use Kijiji to promote your business. It brings more people to your site and a couple of my clients notice more calls and sales when they put in an ad!

This site uses Akismet to reduce spam. Learn how your comment data is processed.