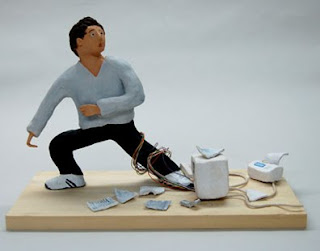 I always gently remind my clients that they need to blog regularly in order to create a following and to keep things interesting and fresh. So here I am, months after my last post, not following my own good advice.

Does the excuse being really busy count for anything? I truly understand the expression about the “cobbler’s children go without shoes”. After a day staring at a computer screen keeping my clients happy, it is a hard job to stay on for even longer to update my own website and blog on a consistent basis.

The title of my post today is about being overwhelmed by technology. I did a sculpture a few years ago called “Escaping technology” (shown above) which is pretty ironic, considering that is how I make my living. But sometimes I resent the lack of time I have to myself. So there are two sides to the coin. Loving it, and hating it.

In April I went to Scotland and England for a ten day visit. It was a very schedule intensive trip meaning that I didn’t really have time for any delays of any kind. I flew to Glasgow and spent four leisurely days with my husband’s family, flew down to Heathrow and started a marathon of driving and visiting. The great thing about technology was that I was able to buy a very inexpensive “throw away phone” in Scotland and use it very cheaply for the ten days I was meant to be there. Point 1 to technology. Before I left, I bought and installed a Europe and UK map for my GPS which made driving from one end of the country to the other a lot less frazzled and allowed me to concentrate on my driving rather than worrying about where I was going. Point 2 to technology.

As you know, Mother Nature made herself heard and the unpronounceable volcano erupted on the Thursday before I was meant to go home. I figured it would be over by the time I was to come home on the Sunday, but it messed up the air traffic until the Wednesday that i was finally allowed to leave. Luckily with my cell phone that I bought at the beginning of my trip, the airline was able to contact me with my alternative flights, and I took my iPodTouch with me on the trip with all my contacts and diary and was able to use the free wifi in the bed and breakfast to connect with any clients or friends at home that wondered why I wasn’t back at work! Point 3 to technology.

A client that I visited at the beginning of my trip gave me a little gadget called a Power Monkey (he sells them in his shop at design-led.co.uk). I haven’t seen them at all in Canada, but I love this little gadget and it was a lifesaver. When I had the rental car, I could plug in my GPS or ipod and charge them, but when I took back the car on the Saturday before my original departure I had no way to charge my iPod or GPS at all. This little gadget plugged into the wall and powered up either your cell, iPod, GPS directly or you could just charge the PM itself and then charge your gadget later. The charge in the housing lasts a year without draining, and will recharge up to four hours in whatever you plug it into. And it comes with seven or so adapters, like usb, phone and iPod, and three different plugs for different countries. When I got home it works just as well in North America! Definite Point 4 for technology.

I suppose I could have gotten along without those gadgets, but it would have been a lot more stressful and complicated.

On the other hand, it is annoying when you buy some gadget or another and it is so complicated to get it to work that it wastes hours of your time.
I have used a hand held device of one sort or another for about fifteen years. I first bought a bulky little machine by Casio called the Cassiopeia. It used a mobile pc operating system and it held my contacts, diary and even Word and Excel Documents. I used it up until about two years ago when it was still working, but Casio didn’t offer updates or support for it any longer and it just couldn’t work with the newer operating systems. I traded a dining room table with my brother for his HP handheld, but I found I wasn’t using it as much and it just didn’t hold it’s charge. So when I bought my husband a iPod Touch for his birthday as a way for him to avoid the hundreds of cds he burns to listen to audiobooks in his truck (he’s a long distance trucker) and the time he spent while home doing this and loading music on to his usb’s, he loved it. Then I had to justify having one too. It had a way to sync your diary and your contacts too, so I was sold. Both of us are pretty good with technology, but it took us about three hours one night to get the thing to recognise the software on my computer it was supposed to use. We tried the next morning and inexplicably it worked. Against technology for time wasting – 1 point.

Yesterday was QuitFacebookDay. It was really in protest to Facebook’s privacy policies, but it struck me as a good idea to help people get their real lives back. I have a facebook account. I rarely sign in, I won’t download any apps or participate in virtual farming, because i just don’t have the time. And sad as it may be, I don’t have many friends on it and once they are on there, we don’t say anything to each other. I have long distance friends, and we email each other or Skype and that’s a more real way for me to keep in touch with them. I have a relative that is on it constantly. And I have heard of many people that have ruined their marriages over revisiting the childhood sweethearts or just the time they spend on it. While I’m not addicted to Facebook at all, if you want to remove your profile from Facebook, here is a link on the ten reasons why you may want to, and here is a link on how to do it effectively. I used to log in to a couple of forums and got quite caught up in them but found I was wasting far too much time being offended by people who ignored my post or formed cliques (where they didn’t even know each other!) so one day I deleted all the posts I had made to one online blog connected to one and stopped posting and deleted all the links to the forums so I would have to actively look for them. I now feel so free of that time waster. Facebook is like that for a lot of people. Against technology – point 2

A fellow called James Sturm, who is a cartoonist and Graphic Novelist has stopped using any form of email or technology for four months. He says he was getting so addicted to it and it was a compulsion to keep checking it constantly. I joke to people sometimes that the noise my computer makes when an email comes in is like Pavlov’s Dog. I don’t salivate, but it takes everything to keep me from rushing to my computer to check out what the email is. So another addictive point against technology. Point 3.

I really have to go and do some work now, but my final for now reason against technology has to be the planned obsolescence of it. Basically, this is that corporations now build your fridges, stoves, computer gadgets to either have a limited physical life or a technological life so it can’t be fixed or is out of date in no time. Here is an article about this particularly. A great little short film on this is The Story of Stuff. It’s about how much the things we buy really cost. I think that the fridge and stove my parents had lasted my whole childhood (well the fridge had an untimely demise due to us kids trying to defrost it faster and poking a hole in it and releasing the freon) but now you are lucky if you get an appliance to last ten years! And I was thinking of usb’s recently. I bought my first usb in 2002 for $80 and it was a 32mb. It seemed a huge size then. Now I see in the local electronics store that they have 32gb for sale for less than that. And I bet that they could have had those size usb’s available all along, but have eked them out slowly so we buy the ever bigger and fancier one. Point 4.

I think I’ve had even points today, but I could think of many more for and against. We can’t go back, but we can think about trying not to covet the next new thing (think iPad) and try to remember where our old stuff is going to go.

This site uses Akismet to reduce spam. Learn how your comment data is processed.